If the nomination form doesn’t seem ‘normal’ when you open it, Click ‘VIEW’ then ‘Edit Document’. Also, if you feel the necessity to print the form, the first page is a full colour page, so you may wish to only print from page two onwards.

Nominations should be timely, reflect the facts, include evidence of eyewitnesses where possible and if relevant, a report from the emergency services. If more than one person is involved in a situation, individual nominations should be made, indicating the specific involvement of each person. Where relevant, written statements from medical specialists should be included.

When the nomination form has the correct local support, send it to the UK Headquarters Awards Team for processing.

Awards are made by the Chief Scout in consultation with the National Awards Advisory Group. 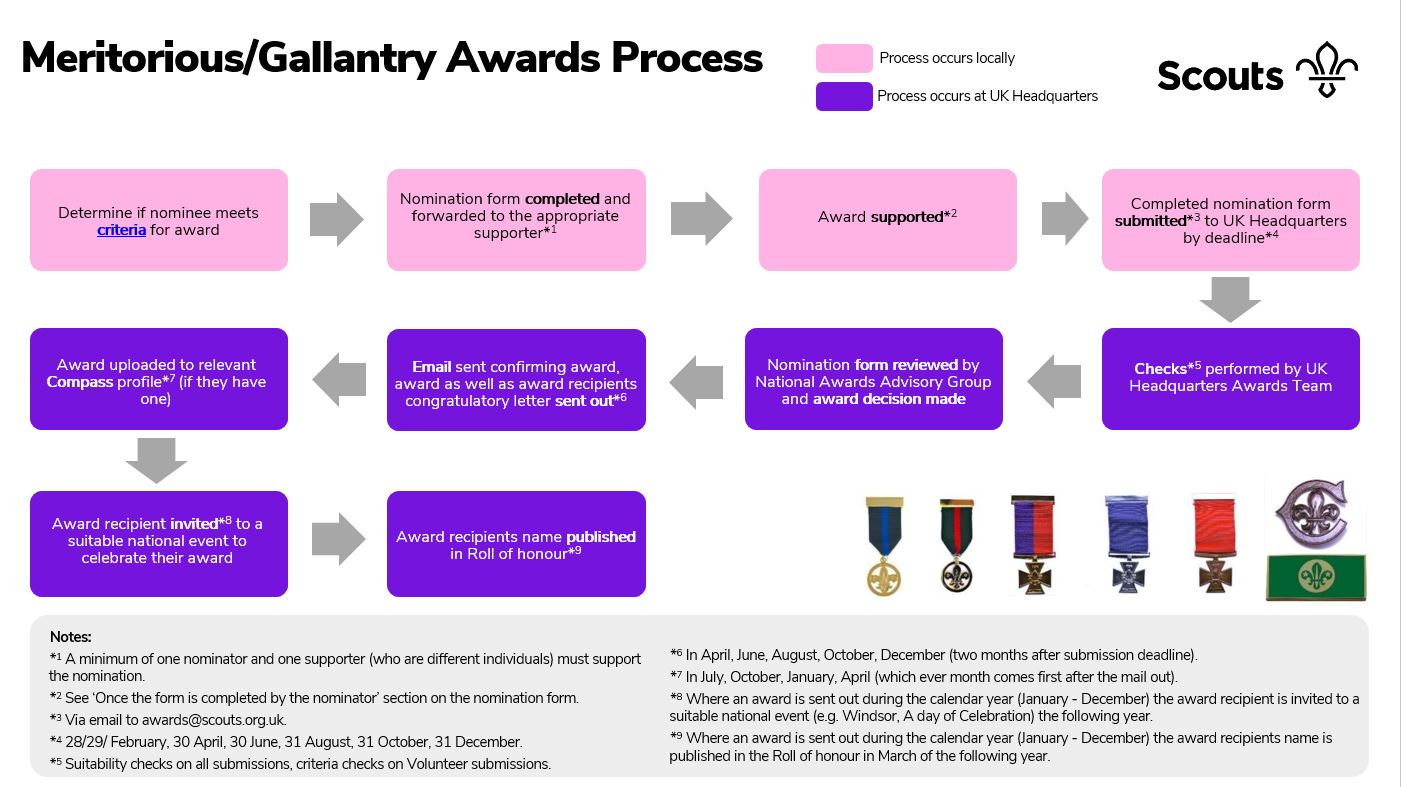 See the diagram of the Meritorious Conduct/Gallantry award process enlarged

These awards are for those who have conducted themselves with a high degree of courage, endurance, initiative or dedication to the Scouts, often through difficulties, without necessarily involving any element of risk.

Bar to Meritorious Conduct awards may be granted for additional acts.

This is awarded for meritorious conduct of a high standard e.g. acts of bravery with no risk to life, or dedication to the Scouts despite the difficulties they have endured.

The medal is a green ribbon with a blue vertical stripe. Cloth badges/brooches correspond to this. This is awarded for meritorious conduct of an exceptionally high standard e.g. exceptional acts of bravery with no risk to life, or exceptional dedication to the Scouts despite the difficulties they have endured.

The medal is a green ribbon with a red vertical stripe. Cloth badges/brooches correspond to this. Commissioners are also encouraged to make Meritorious Conduct nominations for individuals who’ve suffered from COVID-19 but have striven to continue to contribute to the work of the Scouts while ill and recovering. Remember, this award is not just for being ill – it’s for doing superb work for the Scouts despite being ill.

These awards are considered where an individual has put their own life at risk, whilst undertaking a meritorious act.

Bar to Gallantry awards may be granted for additional acts.

This is awarded for acts of bravery in the face of danger where life has been at moderate risk.

The medal is a blue and red vertically patterned ribbon. Cloth badges/brooches correspond to this. This is awarded for acts of bravery in the face of danger where life has been at considerable risk.

The medal is a blue ribbon. Cloth badges/brooches correspond to this. This is awarded for acts of bravery in the face of danger where life has been at extraordinary risk.

The medal is a red ribbon. Cloth badges/brooches correspond to this. This is a rare award, only available to a young person, under the age of 25, in respect of great heroism or pre-eminently high character and devotion to duty coupled with great courage and endurance.

John ‘Jack’ Travers Cornwell was a Scout in the St. Mary’s Mission Group, Manor Park, London, who served in the Royal Navy during the war and did not leave his post, aboard HMS Chester; even when grievously wounded. Three days after the end of the battle, Jack died a national hero but for gallantry, he was given both the Victoria Cross and the highest Scouting award, the Bronze Cross. To commemorate the courage shown by Jack, the Scouts created ‘The Cornwell Scout Badge’ in his memory.

The award includes a bronze badge and a cloth badge of the same design. Consider the following when making a nomination:

This is awarded for many different reasons.

There is no specific requirements for this award.

It's presented by the National Awards Advisory Group on behalf of the Chief Scout as recognition for what someone has achieved or an adversity they've overcome.

Once approved nationally, locally it may be given out (where appropriate) along with a suitable commemorative item. The Retrospective Youth Awards - Compass Upload form can be used by any adult members who achieved a Meritorious Conduct, Gallantry, Cornwell Scout Badge or Chief Scout's Personal Awards as a Youth Member and would now like the award added to their Compass profile

Award holders can complete the form themselves or someone else can do it on their behalf but evidence of the award e.g. a copy of the certificate, will be required.

Those under 25 who are recipients of a Meritorious Conduct/Gallantry award or the Cornwell Scout Badge are eligible for a grant from the Cornwell Memorial Fund. This fund was set up in memory of Jack Cornwell, V.C., and is available for award recipients to undertake an activity of their choice to celebrate their award as part of their Group/Unit.

Get your quick reference guide to Meritorious Conduct/Gallantry Awards here!

Deadlines and processing by UK Headquarters

If you have an award and would like an additional cloth badge, brooch or medal, they can be bought from Scout Stores. You'll need to provide your membership number so we can ensure you are eligible to purchase the item.

Ask for a replacement by filling in the Duplicate certificate request form.

You will need to provide the following details: