Living on the edge: Meet Chris the coastwalker

In 2020, Chris Howard – a father of three from Cambridge – set off on an extraordinary adventure: to walk the entire coast of Britain. Along the way, he’s slept in an old lighthouse keeper’s cottage, boatsheds, and even shared a tent with a fox. Over the last eighteen months, Chris has done over 100 Zooms with Scout groups across the country, as well as many schools, and all along the way, he’s been raising funds for Children in Need.

What gave you the idea for the coastal walk?

I’ve always done endurance based challenges. I’ve also travelled all over the world with my backpack. I was looking at my children during the first lockdown and I thought about how it would’ve been for me if I was a child. I wanted to raise money for children in every corner of the UK.

She’s the star and has been holding the fort at home; supporting me on those days when I’m in tears, it’s been raining for 10 days and there are ticks in my legs.

Which is worse, the ticks or the weather?

Weather’s just weather. People say, ‘You must hate it when it’s raining’. The truth is, it just makes it a different experience. If you let something like the weather get you down, you’ll never get anywhere. You’ve got let go of the things you can’t control and just concentrate on the things you can.

The rain becomes quite refreshing and pleasant after a while.

Angry. Quite stubborn. But I always wanted to do things to help other people. I was always doing charity things at school. I was quite sporty. I played a lot of rugby and did martial arts.

My mum was great but constantly at work. We were just kind of surviving. I also had a job from the age of 13 because I wanted to give my mum some money to help pay the bills.

I grew up in a challenging area and I failed every single one of my mock GCSE exams. It was a real wake up call. It taught me a really important lesson, which is to ask for help. I did, and ended up passing all my exams.

I was a Scout from quite early on. We did challenges and went away at weekends. I once went to Austria for an adventure weekend with Scouts. It taught me a lot about how to treat people well.

What sort of skills did you get from Scouts?

A lot of my practical skills. I’m very good with knots and ropes – that came in handy when I rowed the Atlantic. I can splice rope, which is something most people can’t do. It also built my confidence.

I liked it because it was less about competition and more about learning. Sometimes sports can get too competitive. I liked being practical and doing things with my hands. 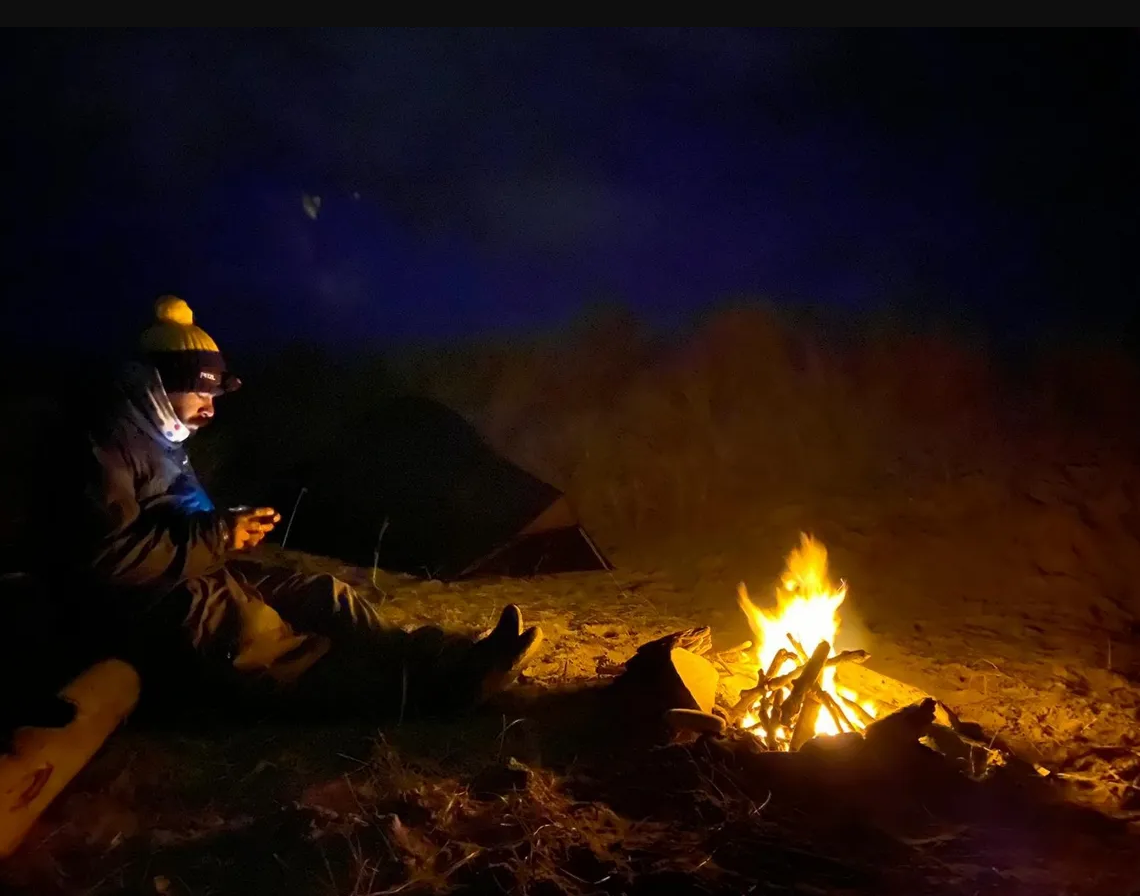 How does being out in the wild support your wellbeing?

I think the outdoors is where we’re meant to be. Until people spend time out in the wild, they don’t realise how important it is. You don’t have to go off on some grand adventure, and go out and spend a thousand nights under the stars. If you just get out there, even for a day, you realise there’s so much natural beauty and wonder in the world that you never to see in a city or your normal working life.

I don’t think living indoors all the time is good for us. It dulls us and makes us less capable. We realise our true potential when we’re out in the wild.

What sights and sounds and smells have you enjoyed most out in the wild?

Some days the smell of rotten seaweed can be pretty off-putting. But the thing that amazes me most is how calm our sea can be around the coast. It’s like glass.

It’s also the colours that I find so special. Walking actually improves the eyesight – seeing the colours of the ground and the rocks, and the different parts of the grass and heather, for example. Seeing the different colours in the clouds tells you what they’re going to do next. That gives me a massive advantage – I can happily walk through the rain, but if I know that if it’s going to rain for twelve hours straight, I know I’m going to have to find shelter.

What have been the most challenging times on the walk?

The real challenge is thinking about what’s going on back home with me not there: maintaining contact with my wife and children, friends and family. It’s really difficult. Sometimes I’m out of touch for two or three weeks. Phones are brilliant, but I don’t always have connection, and people are busy too, leading normal lives.

There’s a loneliness side to long distance walking that people don’t always understand. Especially up here in Scotland; I can go days at a time without seeing anyone. This often means the only person I’m having conversation with is myself.

You have to remind yourself, when you do see someone, that social etiquette still exists.

How do you combat loneliness?

I’ve learnt to enjoy my own company. But I also challenge myself in different ways, or think about different things. I try and learn about the environment that I’m in.

The other day I was on a really big stretch of beach. I didn’t see anyone the whole day, and I knew I was going to have to pitch up somewhere.

I always try and pick one good thing I’ve done that’s good, so that tomorrow I’ll wake up and feel positive. So for example, once I did a beach clean for the last hour of the day. I knew then that there was less litter on the beach.

The other day, I set myself the challenge of counting to a thousand because I don’t know anyone who’s done that before. And I now know why: because it’s boring! Thinking of different things that will occupy your mind and distract you is useful.

But you also have to remember that things are temporary. So no matter how hard it seems, it’s going to end. So just over that hill for example, there’s another flat beach that’s good for walking. 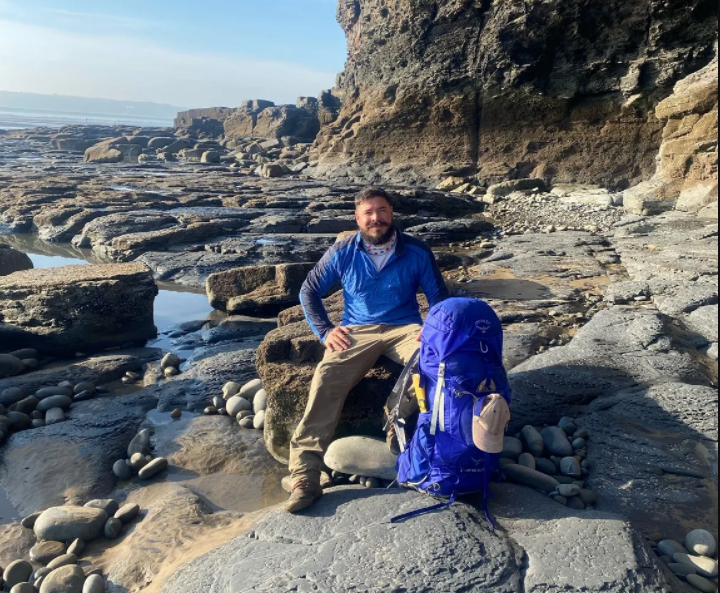 What’s the biggest luxury that you carry with you?

I don’t really have luxuries but I do have a book with me. I can then swap it with people I meet, or in a book exchange. There are quite a few phone boxes where you can do that.

I’m reading a book by Levison Wood at the moment, called Walking the Himalayas. I’ve walked the Himalayas myself with my backpack and I thought it would be a nice kind of thing to reminisce about. His writing is brilliant.

There’s a guy who walked the coast of Britain over many years who sent me the book he wrote about his journey. I read the first chapter and immediately put it down and rang him and said, I’ll have to read this when I get home – I need to go on my own journey first.

What have been the highlights for you on this trip?

I did a Zoom talk with a school and had a question from a boy who asked me about the charity I was walking for: Children in Need. Normally, people will ask what food I’m eating or what animals I’ve seen. I asked him why he had asked the question and he said that it was his first day back in school after a brain tumour operation that was funded by the Children in Need. He wanted to thank me for raising money for them. That was a very humbling experience.

I also met somebody in Bournemouth who’s been following my progress since the beginning. He’d leave kind comment on my posts and blogs. He was retired, had lost his wife and didn’t really know what to do with himself. He said, ‘I just wanted to tell you you’ve really helped me process things and give me something to focus on and distract me from other thoughts.’ That was amazing.

There are a lot of people who would love to have done this walk, and I’m doing it for them – both adults and young people.

I’ve been allowed to sleep in all sorts of strange places: an old lighthouse keeper’s cottage, windmills, hay barns, Hurst Castle, boat sheds, and once even shared my tent with a fox.  Last night, I slept on an island, just off the end of Campbeltown. I stood watching the sun go down and realised I was the only person on the island. Even if I wanted to, I wouldn’t have been able to get off until the morning because of the tides.

What’s the most beautiful sight you’ve woken up to?

Often I’ll just sleep in my bivvy bag, so the last thing I’ll see are the stars and the first thing I’ll see in the morning is whatever’s around me and the sun coming up. That natural cycle of time has reset my circadian rhythm. I feel much more in tune with the natural world.

I once woke up to an amazing sunrise in a field with rabbits and deer all around me. It was like being in a Disney film. Because I didn’t make any movements or noise, the animals just carried on as if I wasn’t there. You just have to take a breath and enjoy it. 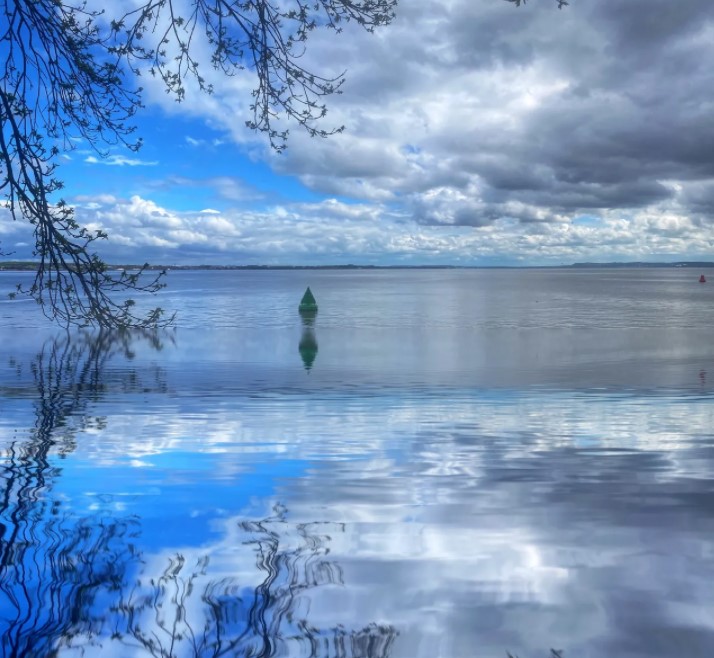 What’s been the most dangerous moment on your journey?

There have been a few near misses. I came down the coastal path in Devon near a beach that’s notorious for erosion. As I was walking, I heard a grinding noise behind me. Then, as I stepped off the path onto the beach, there were coastguards and blue flashing lights. The coastguard said, ‘You might be the luckiest person in the country. There’s just been a twenty tonne landslide and you’ve missed it by minutes.’

You have to be careful – there are plenty of places you can slip, especially with a heavy backpack on.

What’s the one thing that’s surprised you most?

I’m constantly surprised by how beautiful and diverse the British coastline is. It’s different everywhere you go. It’s amazing to me that we ignore so much of it. We fly all over the world on holiday, but why not come to your own coastline, spend money here and support local communities? I’ve just walked a nine mile stretch, and I’ve only seen five people. Where I’ve just walked here in Scotland – the water is so clear and the sand so white, you could be in the Caribbean.

The other thing is the people. I’ve met hundreds of people – and they’re always so kind. It’s the people who make the place, not just the place itself.

What keeps you going?

In the beginning, it was the idea that I might raise some money for children who really need it. Also, thinking about John o’ Groats was big mental checkpoint, because I knew that from there on, I was going home. I think about my wife and children and getting home to them.

I hope I’ve inspired my children to know that they can do whatever they want in life. They don’t have to take the conventional path – they can do anything.

Adventure can be whatever you want it to be. It starts with you. You have to decide and commit to it. Once you’ve done that, everything will fall into place. But without starting, you’re never going get anywhere. Adventurers aren’t special. They’re just like you. You’ve just got to start doing it.