How to have a UFO camp at home

Struggling to keep the kids entertained over weekends or during the school holidays? You may not have thought about hosting a camp before, but a series of activities and snacks could be just what you need to get everyone spending time together and learning new skills – unusual sleeping arrangements optional. 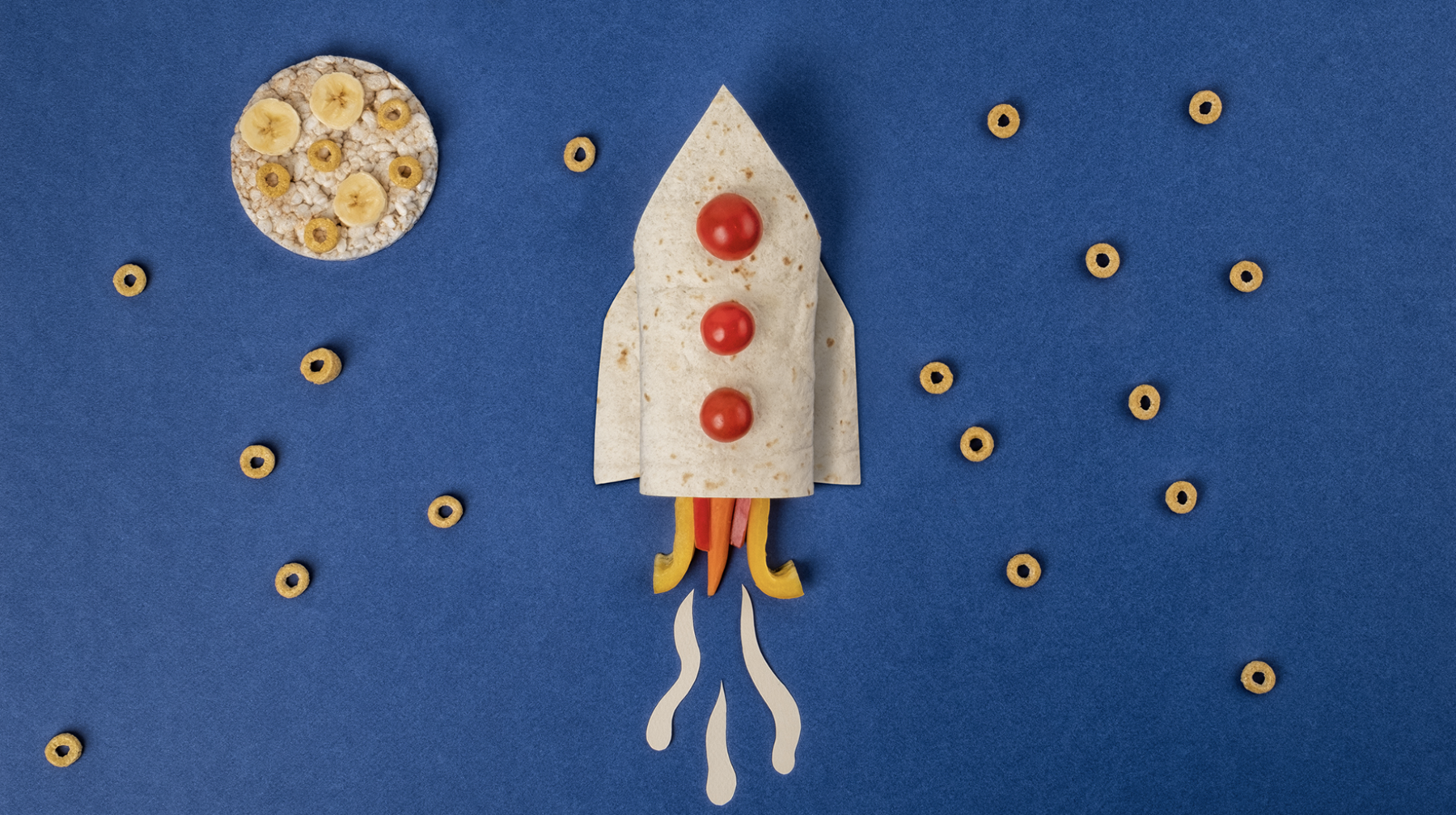 At Scouts, camps often have a theme to tie all of the fun and adventure together. UFOs are a natural choice: as adventurers who can often be found outdoors, it makes sense that Scouts would be tied into the history of UFO-spotting. And Scouts love space – it comes as no surprise that the majority of those who’ve walked on the Moon have been Scouts.

The good news is that we’ve done the planning for you. Buckle in and prepare for take-off as we dive into UFO tales and find out how you can tie together activities and treats to host your very own out of this world camp. Just try not to get abducted by aliens.

One of the most intriguing UFO sightings on record involved a Scout leader – D.S. ‘Sonny’ DesVergers. Picture the scene: it’s a hot, sticky night in Florida. August, 1952. D.S. ‘Sonny’ DesVergers staggers from a dense palmetto grove, burned and barely able to speak or see. When pressed, he says he came across an unidentified flying object and it discharged a fireball at him, causing his injuries. There are no other witnesses, and the case is never solved. Spooky, right?

‘UFO’ is an abbreviation for the US Air Form’s term ‘unidentified flying object’ and refers to any moving object in the sky that you can’t readily recognise. In the military, it doesn’t usually mean that the object comes from space, and some areas of the Ministry of Defence prefer the term UAP (unidentified aerial phenomena) to avoid any alien connotations.

There’s good news and bad news if you’re interested in learning more about historical UFO sightings. Official reporting, analysis and recording of sightings began in the early 1950s, but until 1967, the Ministry of Defence destroyed their UFO files every five years, so lots of records have been lost. Since 1970, however, most surviving files have been reviewed for eventual release by The National Archives. There are already a huge number of files that you can access – you can view the highlights here.

UFO sightings increased after the second world war, and there are a few theories on why this happened. The more ’grounded’ theories talk about widespread trauma, a mass fear of invasion, and that our improved attempts at flying in the atmosphere of Earth (aeronautics) and surrounding space (astronautics) made people realise other life forms might be capable of the same thing. The first jet plane flew in 1939, after all, and just three years later, so did the first rocket that could touch space. Of course, three years after that, an American B-29 bomber dropped the world’s first deployed atomic bomb over Hiroshima, Japan, killing 80,000 people instantly.

Some people believe that distant solar systems took note that the human race was now capable of mass destruction and that this threat required increased surveillance. Hence, more visits from alien spaceships. We’ll leave it up to you to decide what you believe.

It’s easy to presume that UFOs are more of an American thing, but it’s not the case. We have plenty of sightings in the UK too.

Since the 1600s, Warminster – a town on the edge of Salisbury Plain, a top military training area in Wiltshire – has seen a supposed frenzy of UFO activity. The number of sightings is so great that Warminster has its very own designated National Reporting Centre for UFOs. Warminster is close to the mysterious Stonehenge, a World Heritage site consisting of a ring of massive stones dating back to around 3100BC. Sightings here have included a large ‘flying saucer’ hovering above the stones, and strange patterns appearing in nearby fields. Some people believe that aliens built Stonehenge, and that the area is a landing pad for their spaceships or a location marker for them to find their way back to Earth.

The Welsh Triangle, named after the similarly strange Bermuda Triangle, saw a wave of UFO sightings in 1977. In February, 14 schoolchildren in Broad Haven claimed to have all seen a spaceship in a field by their school, accompanied by an alien in a silver suit. Nobody believed them, so they submitted a petition to the local police asking for the incident to be investigated. When their headmaster separated them and asked them to draw what they saw, their pictures were strikingly consistent. Nearby, in April the Coombs family claimed a 7ft spaceman in silver appeared at their window, and a hotel owner in Little Haven wrote to her MP after spotting a UFO and aliens similar to those described by the Broad Haven schoolchildren. The MP escalated the matter and an RAF officer was sent to investigate. He left mystified, and the case was never solved.

For almost a decade, Dudley has experienced multiple sightings of the ‘Dudley Dorito’, a dark triangle-shaped aircraft with lights on each corner and sadly, no cheesy coating. First seen by a dog walker in 2007, it’s usually silent, very slow, and is said to be four or five times larger than a plane. There are multiple photos and videos of the object, and some people claim that it’s an experimental military vehicle. The military have yet to confirm (or deny) this.

While you might not be able to hop onto a train to visit the UK’s UFO hotspots right now, you can find plenty of stories (and photos) online to inspire your activities. Why not great creative and re-enact a sighting or craft the scene? No prizes for guessing what you could use to turn Dudley’s UFO into an edible creation.

The obvious star attraction for a UFO camp is UFO spotting – all you need is your binoculars. We’re not saying you won’t spot a UFO, but you might want to use a map or live app to show everything else you could look out for while you wait – it’s hard to feel disappointed when you’re marvelling at the wonder of planets, stars, and other out of this world objects.

We’ve got plenty of space-themed activities up our sleeves, so there’s something for everyone. Create your own fruit salad solar system, then get energised with a cosmic quest and prepare for a mission to Mars. Older young people (or anyone who’s feeling technical) could craft telescopic creations, create a planetscape, and ask the big questions such as ‘Is there life out there?’.

There are also a million ways to turn simple games into space-themed fun: grab a glow in the dark Frisbee for ‘catch the flying saucer’, or make your own ‘pin the alien on the spaceship’.

Ask anyone who’s been on a camp with Scouts, and you’ll probably find that some of their fondest memories involve food. Camps are a great chance to get creative, exploring ways to try new things and make snacks fun. The only limit is your imagination.

One simple snack is to get a platter of crisps (those oval-shaped foil platters are great for this) and place a bowl of guacamole in the centre. Stick two green spoons into the bowl, and add googly eyes to the back of the spoons. Voila, alien invasion.

You can also turn wraps into rockets by adding triangles of carrot, buttons made of cherry tomatoes, and flames of red and yellow peppers, and rice cakes into moons using slices of banana and Cheerios as craters.

An easy and impressive space snack is to take yoghurt-covered pretzels and add icing to the two largest holes to make eyes. They’ll bear a striking resemblance to everyone’s favourite extra-terrestrial.

We spoke to Scout Ambassador and astronaut, Tim Peake, to find out what he thinks about spotting intergalactic visitors.

First, the most important question: do you believe in aliens?

Yes! When you consider the vast expanse of the universe, the number of potentially habitable planets out there, and the relatively fast emergence of life on Earth some 3.5 billion years ago, I cannot imagine that life hasn’t evolved elsewhere.

Have you ever seen a UFO?

I’ve seen a few unidentifiable flying objects over my career as a pilot and astronaut, but none that acted so strangely that I considered they might be from another planet.

Apart from alien spaceships, what other things could we look for in the night sky?

The ISS (International Space Station) is a great starting point if you haven’t already seen it. Mars, Jupiter, Saturn and Venus are also easy to spot and, if you have access to some stabilised binoculars or a telescope, you could try to see how many of Jupiter’s moons you can spot.

If you wanted to spot flying objects (unidentified or otherwise) in the night sky, how would you go about it?

First, try and get to an area of low light pollution – you’ll be amazed how much clearer the Milky Way appears. There are also some great apps that show you where to look for stars, planets and satellites (such as the ISS and Hubble telescope).

Finally, what’d you do if a spaceship landed and an alien got out?

Jump in! I’d love to take an alien spaceship for a spin and see what it could do.

Feeling inspired? We’d love to hear more about the space-themed fun you get up to. Tell us all about it by emailing us at communications@scouts.org.uk.

If you love the idea of an out-of-this-world camp at home this summer, join us for the #TGIWeekender on 11–12 July.