Exploring the world on four wheels is easier than you might think. Here, Finn Eyles talks about the small changes that made a big difference to their Scout experience, and explain why we need to encourage more people to have adventures on their own terms. 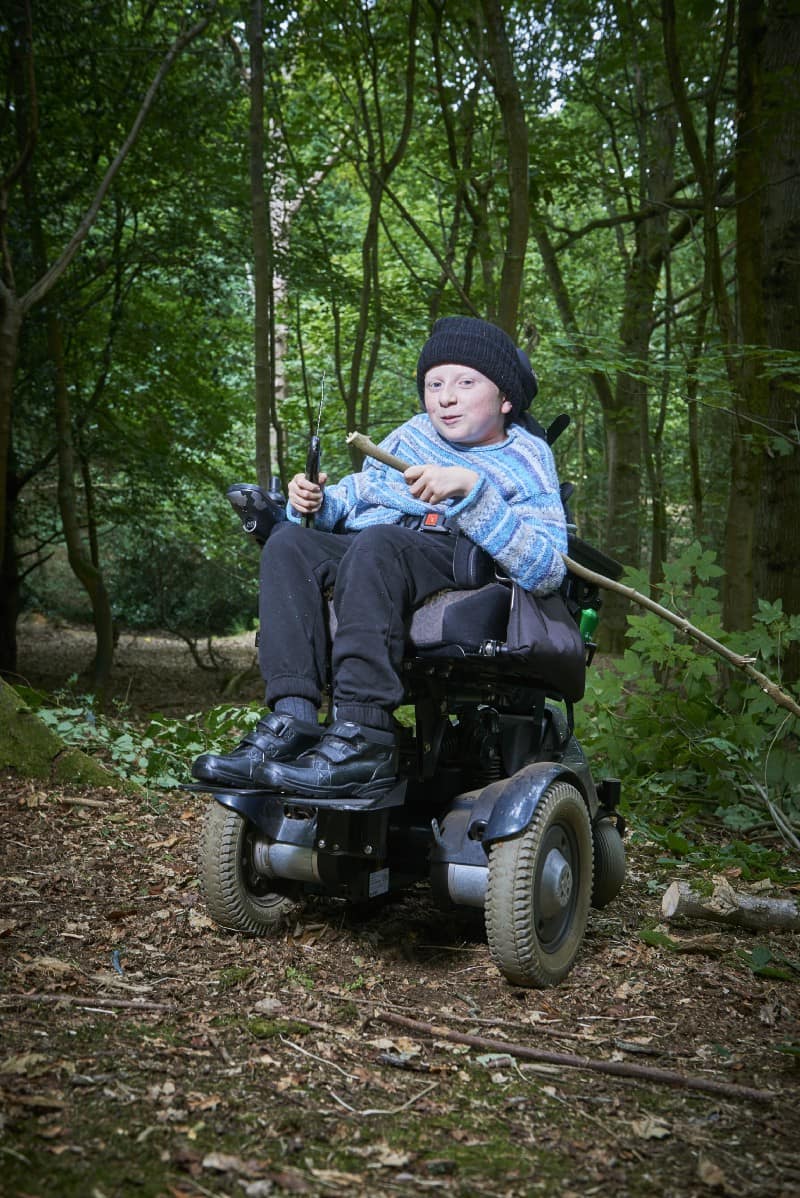 Although he was born with a genetic condition called Spinal Muscular Atrophy (Type 2) and uses a wheelchair to get around, he’s one of the most active Scouts in the District. Finn Eyles excels in precisely the sorts of things that you might not necessarily expect in a person with a disability, from archery to bivvy-building to firelighting.

His mum and dad, Lou and Andy Eyles, initially joined the Scouts to give him some extra support. But, they say, they immediately ‘got hooked’ themselves and soon became joint Assistant Scout Leaders. They’ve now been taking part in the Scouts as a family for two years.

Does having Spinal Muscular Atrophy affect you much as a Scout? Is there anything you have to think about or do a bit differently?

Lou: Finn is pretty independent and plays a big role in the Group, but if he’s doing something where some strength is needed, that’s when he needs some extra help.

Finn: Yeah, that’s when I need more support, but I can do nearly all of the activities on offer and I have a lot of hobbies. It’s only occasionally I’ll need to avoid something at Scouts. If there’s a hike at nighttime when there’s low visibility, for example – that would be more difficult for me than it is for other people. But I can really do a lot!

You’re all still relatively new to Scouts. What drew you to join?

Lou: It was a bit unexpected. A leap of faith, really. Finn’s Dad and I were sat up late one night, reminiscing about camping and other outdoor activities we enjoyed as kids. At first, we weren’t sure whether Scouts was going to be beneficial for Finn. We didn’t want to set him up for disappointment. We didn’t want to introduce him to all these new and fun things that ultimately he might not be able to do. We decided to try it and see.

Finn: Yeah, we just decided to give it a go one day and we really liked it. I really like all of the survival skills; the camping and the firelighting. That’s what kept me doing it. It’s stuff I wouldn’t get to do at school.

What sort of adjustments do you have to make, as a family and as a Scout Group?

Lou: Whenever the Group goes on camps, we let them get their more challenging day-long hikes out of the way, and join in from the next day onwards. That usually works out well. Overall, we’ve found that some people can naturally adapt activities, while others need more help understanding how something can be tweaked.

'I'm working towards my Chief Scout's Gold Award, and I’ve only got one more Challenge Award to complete for it.'

Can you think of any specific examples, where an activity you previously couldn’t do has been made more accessible?

Lou: When Finn signed up to do archery at the Scout Activity Centre in Pinset, he hadn’t been at Scouts for long and we weren’t sure what to expect. We really wanted him to take part, but there was just no way he could pull a bow string back, due to difficulty with his core strength. I visited the centre to let them know about the situation and, unbeknownst to us, the team took it upon themselves to make Finn a bow stand from scratch. It was made out of bits of scaffolding and scrap materials, and it completely opened up a new sport to Finn. By the end of our sessions, he’d gained his Master at Arms Badge, and now he loves archery, which he would never have tried otherwise. It was a simple gesture, really, but it was so kind. It’s always worth firing off a quick email to whoever is in charge of an activity or camp. As Finn has said, there’s usually a solution, and if people know what they might need to do differently, they can be better prepared.

Finn: I loved doing the archery! I’m working towards my Chief Scout’s Gold Award, and I’ve only got one more Challenge Award to complete for it. I really like the survival badge, too.

Lou: The survival stuff has been so much fun to
complete. Another great memory for me is when we went on one of the County survival weekends. Do you remember that, Finn?

Finn: Yeah, that was great.

Lou: Everyone had to sleep outside in a bivvy. The other Scouts had these tiny, low-hanging shelters, but we had to work together in extreme weather to build a giant one for Finn, to accommodate the height of his wheelchair. I remember sitting there, watching him having a brilliant time, and thinking, ‘this is exactly the sort of thing you don’t expect a disabled person to do’. He was just absolutely roughing it and having the best time. You make so many memories through the Scouts.

Finn: It’s the sort of thing you never normally do, apart from when you’re at Scouts. We went on a hike near Gloucester last year. That was one of my favourite things we’ve tried, because we got to look over at the Black Mountains in Wales when we reached the top. We had lots of fun and all the young leaders were helping to manually push me when it got hard.

Lou: The team really rally together.

8th Winchester seems like a really tight-knit Group. Could you tell us a bit more about the fundraising you have been doing recently?

Finn: This year, we’ve been raising money as a Group so that I can hopefully get a new wheelchair. My current chair has been great, but we do lots of different activities as a family and at Scouts, and we’ve really pushed it to its limits by taking it to places that this type of wheelchair wouldn’t normally go. The new model has wheels that can be easily swapped and changed, so Mum won’t be constantly chasing after me, worried that I’ll topple over when I go too fast!

Lou: The chair we’d love to trial for Finn is the Magic Mobility Frontier V6. It’s easy to manoeuvre in tight spaces at school but robust, stable and powerful enough to cope with regular trips through the woods and on uneven terrain. Unfortunately, the chair is very expensive so, back in July, five of our leaders undertook a sponsored hike to walk 55 miles from Oxford to Winchester. When the walk was planned, they weren’t anticipating that an intense heatwave would hit the UK, sending temperatures over 30 degrees! But despite this, they managed to cover 30 miles on the first day and 25 on the second. They’ve raised over £5,000 for Finn so far.

Finn: The leaders and young leaders have been amazing! And the other Scouts have been brilliant, too. As well as the big hike, we’ve done lots of smaller fundraisers. One of them did an ice cream sale and the other did a cake sale. Everyone has joined in, which is really nice. Joining Scouts is the best thing we’ve done.

Editor’s note: A few months after this story was published in Scouting magazine, Finn completed his Chief Scout’s Gold Award – the highest award you can earn in the Scout section. Thanks to the support of his fellow Scouts and leaders, he was also able to reach his fundraising target and is currently waiting for his new chair to arrive. You can read more about his story on GoFund me.