A century on since the burial of the Unknown Warrior at Westminster Abbey, Scouts still remember those who gave their lives in war and conflict. 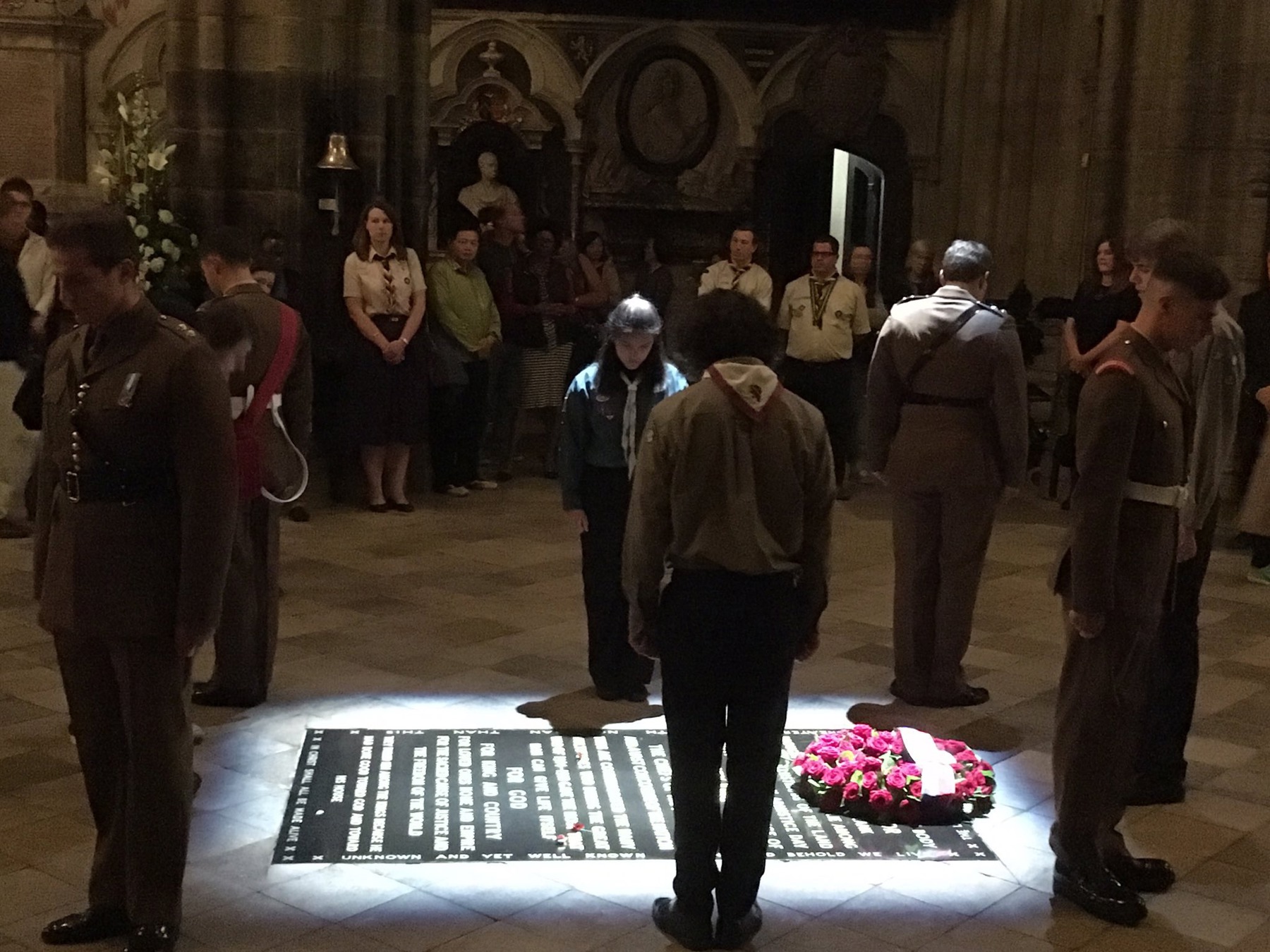 Even during this challenging year, we’re encouraging Scouts to learn more and show their support for the Royal British Legion by wearing the Scouts poppy badge and scarf with pride.

Remembrance is always a special time for Scouts. It’s a moment for us to reflect on the sacrifices made, to learn from history and most importantly, to remember those who gave their lives. While most Scouts will be unable to take part in public events this year due to the restrictions brought on by the pandemic, there are many other meaningful ways we can commemorate and remember.

As well as being the anniversary of the signing of the Armistice, 11 November has extra significance this year – it’s the centenary of the burial of the Unknown Warrior. This serviceman, who lies in Westminster Abbey at the west end of the nave, has come to represent the sacrifice of millions – and is one of our most powerful symbols of remembrance. His body was brought from France on 7 November 1920 and buried with the sort of ceremony reserved for royalty and national figures on 11 November 1920.

The Reverend David Railton, a chaplain serving on the western front, is credited with the idea. After seeing a grave in Armentières simply marked ‘An Unknown British Soldier’, he wrote to Herbert Ryle, Dean of Westminster, and made the suggestion for an unknown warrior to be buried alongside our kings and queens. The soldier (chosen from one of four unknown warriors) could have been from any of the three services, and therefore represents all those who were lost.

Every aspect of the burial was given special thought. The warrior was placed in an outer coffin made from an oak grown in Hampton Court Palace garden. A flag used by David Railton as an altar cloth was draped over the coffin (and today, can be seen hanging in St George's Chapel, Windsor). As a final symbol, the sword of a 16th century soldier was inserted in the irons bands of the coffin. The unknown warrior was then brought across the channel from France to Dover by the destroyer HMS Verdun.

The coffin was borne on a gun carriage pulled by six horses through the streets of London, stopping at Whitehall where the Cenotaph was unveiled by King George V. When the cortege reached Westminster Abbey, it was greeted by a guard of honour made up of one hundred recipients of the Victoria Cross, along with a thousand mourners. Among them was the Scouts’ first President, HRH The Duke of Connaught. Perhaps most movingly, the guests of honour at the funeral were one hundred widows who had lost not only their husbands but all their sons during the First World War.

A hundred bags of earth from the battlefields of the First World War were used to fill the grave. After the service, mourners paid their respects while a guard of honour stood at each corner, in the haunting light of four candles. However, it wasn’t until the following year, on 11 November 1921, that the famous stone of black Belgium marble was unveiled. The inscription began with these words: ‘Beneath this stone rests the body of a British warrior unknown by name or rank brought from France to lie among the most illustrious of the land…’

A century of remembrance

For a century, the grave has acted as a focal point for remembrance. In June 2016, our Patron, Her Majesty the Queen and HRH The Duke of Edinburgh, attended a service to mark the centenary of the battle of the Somme at Westminster Abbey. Four Scouts represented the movement during the all-night vigil that followed the service, honouring Roland Philipps, one of Scouts’ early pioneers, who died in the battle. The Scouts and their leader, all from East London (where Philipps supported Scouts), stood at the tomb between 9.45pm and 10pm.

In villages, towns and cities across the UK, Scouts have continued to play a leading role in remembrance commemorations. From supporting the annual ceremony at the Cenotaph (from as early as 1922) to laying wreaths at local war memorials, Scouts have made a promise to remember which has yet to be broken.

The Royal British Legion has provided the following statement about the annual march past the Cenotaph – ‘To ensure the safety of all those who are participating and to comply with social distancing measures as a result of the COVID-19 pandemic, the overall number of people taking part in the March Past the Cenotaph 2020 will be considerably lower than in previous years. The well-being of those who choose to attend the March Past is our priority, and we have been working with the Government and relevant associations to ensure the march is able to go ahead safely and that, in the centenary year of the Cenotaph, as many members of the Armed Forces community as possible are represented.’

Scouts in the First World War

Scouts played a key role on the home front during both world wars. From supporting the coast guard and acting as bicycle messengers to bringing the harvest, they stepped up and played their part during the 1914-1918 conflict.

This special contribution was recognised by Prime Minister, David Lloyd George, when he said: ‘It is no small matter to be proud of, that [Scouts] were able within a month of the outbreak of war to give the most energy and intelligent help in all kinds of service.’

Some 84,000 former Scouts and adult volunteers also served in the armed forces, 8,000 of whom lost their lives. It’s these, and all others who served in conflicts across these last 100 years, that we remember. 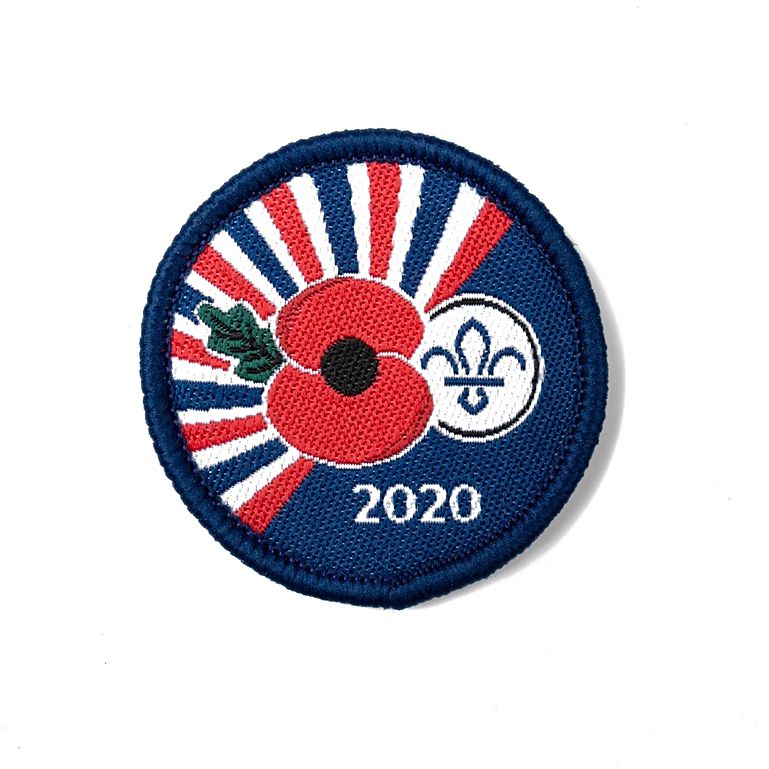 How Scouts can learn more and show their support

To help support our Scouts, we have a range of new activities for Scouts to try in meetings or at home. All are designed to support their understanding of the sacrifices made. A special Remembrance certificate will be available on the brand centre by this Friday (23 October).

Scouts can also give their support to the Royal British Legion, by wearing the official 2020 Scouts Poppy Badge which may be worn on uniform and official scarf. See the full range here.