In our pilots trialling Scouts for 4 and 5 year olds, what is the family-model? Who’s involved? Is it still Scouts? What’s working? What’s not? A leader who’s been involved from the start, tells us all about it. 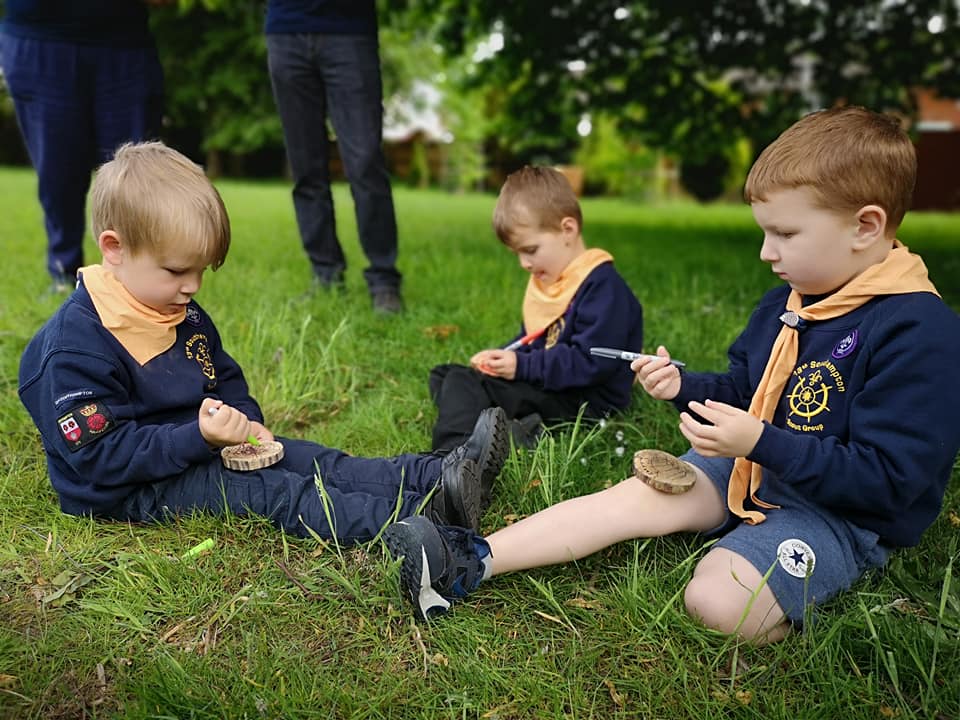 Family Scouting has been running in the US for a number of years where they found 75% of parents go on to take up leadership roles and 61% of the young people are new to Scouting.

In the family-model being trialled through the Early Years pilots in the UK, parents / carers are asked to come together and take the lead delivering the programme to their children. A Scouting volunteer supports the unit providing coaching for the parents to enable them to deliver programme resources, and linking the unit to other local opportunities and activities across the Scout District. Membership is expected to be between 6 and 10 children per unit.

Dan Breeze is a leader at a pilot trialling the family-led model. A Beaver Leader too, Dan got involved when the Group Scout Leader at his Colony in Bradford expressed interest in the pilots trialling Scouts for this new younger section. The GSL sensed that with Dan being a Primary teacher, together they’d have the capacity to take on the challenge of giving the pilot a shot. Their meetings kicked off last September and will run until this July.

Here, Dan shares his insights into how the family-led model works and how their group has been going.

1. What is the family-led model?

The family-model is where a family member stays with their child and gets involved with the programme that we’re running. I think the idea is that the families eventually take on more of a leadership role but at the minute it’s more that they’re just getting involved with their children and interacting and learning the skills for life that we’re teaching – they’re developing with the children.

We take the lead on the programme-planning, to make sure that there’s that Scouts element and we talk quite a lot about the Promise so the Promise weaves into quite a lot of the sessions. And the adventure side of things – being in the outdoors, learning about the outdoors – it’s all very much entwined with the programme, as well as matching the Early Years Foundation Stage goals.

2. How many young people are involved?

We currently have five young people but ideally, we’re looking to get eight families involved so we’re still developing the numbers.

3. Where and when do the meetings happen?

We meet at a local church once a week between 5.30-6.30pm. Before we started, we actually put it out to the parents to see what time they’d prefer and that’s what they suggested but we’ve had a bit of frustration getting the numbers we’d like. We’ve had lots of interest but getting people to actually sign up has been more of a challenge and part of that, we think, is because of the timing. 5.30 can be a tricky time for parents but then again 6-7pm was too late for the young people. The other thing that put some parents off was staying with their kids throughout the session because of other commitments or having to take care of other family members.

4. How were volunteers recruited? What got them interested in volunteering?

Many of the children in the group are actually siblings from our current Scout Group, so we approached those parents first and then their friends. Parents felt that there was something missing for this age group, that sort of nurturing environment for them. They say there are lots of swimming lessons and activities like that but not enough social interaction, and the parents themselves have really enjoyed being part of the pilot as well.

5. What sort of people are volunteering? Is there a mix? We’ve heard that quite a few grandparents have gotten involved in some family-led models, which has been great for developing those intergenerational relationships. Have you got any grandparents volunteering?

We’ve got four mums and one dad. Not any grandparents in our group – we’ve offered that as an opportunity but there haven’t been any getting involved yet.

6. And how are they going? Have you had much feedback?

We’re still developing getting parents more involved with the leadership and running different activities but on the whole, they’re really positive about the experience. Both the parents and children are really enjoying it and enjoying being part of it together. We have one child who’s a Beaver who comes with her brother every now and again and it’s really nice to see her teaching some of the skills she’s learnt at Beavers, and getting involved in a mentor-type-role.

7. Do the children tend to cling quite closely to their parents?

At first, we saw that happen but then as time has gone on, we’ve seen their independence grow. Also, we’ve found that because they’ve all got like a one-to-one helper, all the activities happen twice as fast as we expect them to. And so, in our programme planning, we’ve had to add to the programmes that have been set out. If the children hadn’t had the parents there, that extra support, things would have taken that extra bit of time.

8. Do you find that because of that support and because it’s their parents, that the young people are more engaged, and perhaps easier to manage?

Yeah, parents support with the trickier tasks. That extra pair of hands is really helpful. But then again, we did Den Building the other day, and parents took much more of a hands-off approach; they left it to the children and went with their ideas. They were more instructive and didn’t just do it for them. It’s about developing those skills in the parents, coaching rather than doing.

9. Are you encouraging them to stand back more and more?

Yeah, and to take more of a mentoring role rather than doing it with them. More of a helping role.

10. Is it as much of a learning experience for the parents as it is for their children?

I think so. For some of the parents more than others. They’re learning skills about how to support and help their children with their learning, which is a really nice thing to see – to see those children weaned off the reliance on their parents, and more and more as the programme’s gone on.

11. Do the parents receive any training beforehand?

12. Is that something you think would be beneficial, if the programme were rolled out more widely?

I think if it were rolled-out as a family-led model, it’d be good to get them to a position where they’re willing to lead. That’ll need some form of training. But in saying that, one of our parents is a teacher so she’s not really keen on taking on that leadership role because she does that at work, so it’s about getting the balance of who’s willing to take on that role and then giving them the support to be able to do that.

13. What hasn’t worked well and what needs improving?

We need to work out how we can really engage with the parents to take more of an active leadership role, because our parents are great, don’t get me wrong, they’re really supportive of all the work we do but if the family-led model were rolled out, I’d be wanting the parents to be taking more of a leadership role. Because I personally feel like we’ve been running a family-involvement model rather than a family-led model.

And then also, we believe that the responsible adult being there has restricted some from joining. Although it’s nice to encourage someone to stay, it’s meant some children haven’t been able to participate in the programme. It’s created a barrier for some children to get involved, even though we’ve said to families it could be any adult and we’ve even then gone back to them to say they don’t have to stay, but they’ve still felt discouraged.

14. So, in a way it’s excluded certain children whose parents can’t stay?

Yeah, there was one family we spoke to with seven children and it’s just not possible for those parents with all their childcare demands.

15. All families have their own value systems and rules – have you seen any instances of these clashing with the Scout values?

Not necessarily clashing. I’ve personally found it’s been about getting the balance between the role I play in a Colony as a traditional Beaver Leader and now – having the parents there as well and so balancing the element of who takes control. When is it my responsibility to encourage the right behaviour and when is it the parents’ responsibility to step in?

But as the programme’s gone on, we’ve found that balance, and we’ve found that because we talk about the Promise an awful lot and the first few sessions were based around the Promise, the feedback from the parents was that they all really engaged with the ‘Try your best’ element. Apparently, that’s what they talk about at home quite a bit, that ‘Well, it’s OK, as long as we’re trying our best’.

That’s the real benefit of adding the family element – the engagement at a family-level. Parents are fully involved and developing their skills as well as the children. And they’re taking the messages back into families, engaging with the programme and talking about the messages at home.

This pilot was visited last month by external evaluators ‘The Centre for Research into Early Childhood’ who observed the quality of the programme was high and children were highly involved and motivated. Positive impact on the children (enhanced confidence, social skills and language) and also on parents was evident.

A decision about whether or not to go ahead with Scouts for 4 and 5 year olds will be made by the Board over the summer. The decision will be informed by ongoing research as well as the thoughts and feedback of our members so let us know what you think.