The composition of the Troop

Many are the claims that have been made by people who have said that they were at the historical Brownsea Island camp with Baden-Powell, Founder of Scouting. Others have claimed that their fathers or uncles were one of the 20 boys chosen by B.-P., on whom he tried out his new 'game of Scouting'

It has also been repeatedly said that these boys came from various classes - some from Eton and others from the East End of London. The accuracy of this statement is, however, open to conjecture. In his book, 'The Scout Movement', E.E. Reynolds records, 'B.-P. decided that he wanted a mixed company of boys to see how they would get on together so he formed his party out of some sons of his own friends [some of these may well have scholars at Eton] and some boys selected by the Boys' Brigade of Poole and Bournemouth; in this, and in helping to organise the camp, he received great assistance from Mr H. Robson and from Mr G.W. Green both of the B.B

It is just possible that some of the alleged East London boys may have been members of the Boys' Brigade but it seems unlikely that the two Brigade Officers who were invited to make the selection would have chosen any but local boys who were known to them personally.

Reynolds' account is supported in the Association's official history, 'B.-P.'s Scouts' in which it is written: 'In his preparations, B.-P. had been greatly helped by his friends of the Boys' Brigade; for example, Mr H. Robson and Mr G.W. Green had helped provide Brigade boys and to collect stores. Other boys at the camp were sons of the friends of the General himself'. In neither of these two books will it be seen that specific mention is made to Eton and East London boys.

However, when it comes to naming the actual campers, we can be much more definite. Those listed later have been taken from three separate sources, i.e. 'A' from an article by B.-P. in 'The Scout' dated May 30, 1908; 'B' from Sir Percy Everett's 'The First Ten Years'; and 'C' according to E.E. Reynolds' 'The Scout Movement'. It will be noted that although there are certain variations in some of the initials, the surnames more or less agree in each list. The 'B' in Brimmer, a member of the Bull Patrol, column 'A', is obviously a typographical error, whilst the name 'Giles Walter' of the Wolf Patrol, column 'A' seems clearly to be a case of the surname being shown first, although no explanation can be given as to how Walter came to be a substitute for Reginald. 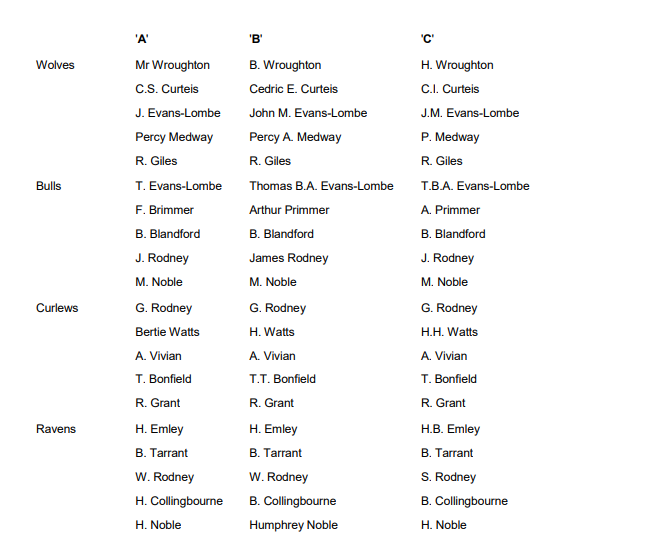 As to the other persons present at Brownsea, we know for certain that B.-P. selected two 'Assistant Scoutmasters'. One was Major Kenneth Maclaren, an old Army friend, and the other was Percy W. Everett (later Sir Percy Everett) who was then the Literary Manager of Pearsons the publishers, who later became Deputy Chief Scout. A third person present at B.-P.'s camp was his young nephew, Donald Baden-Powell who, it is said, acted as B.-P.'s orderly.

Learn more about the first troops